The saying is true ” The best time to plant an apple tree is five years ago.  The second best time is now.”  Growing up with several fruit trees ,  we knew we wanted to have several on our homestead. 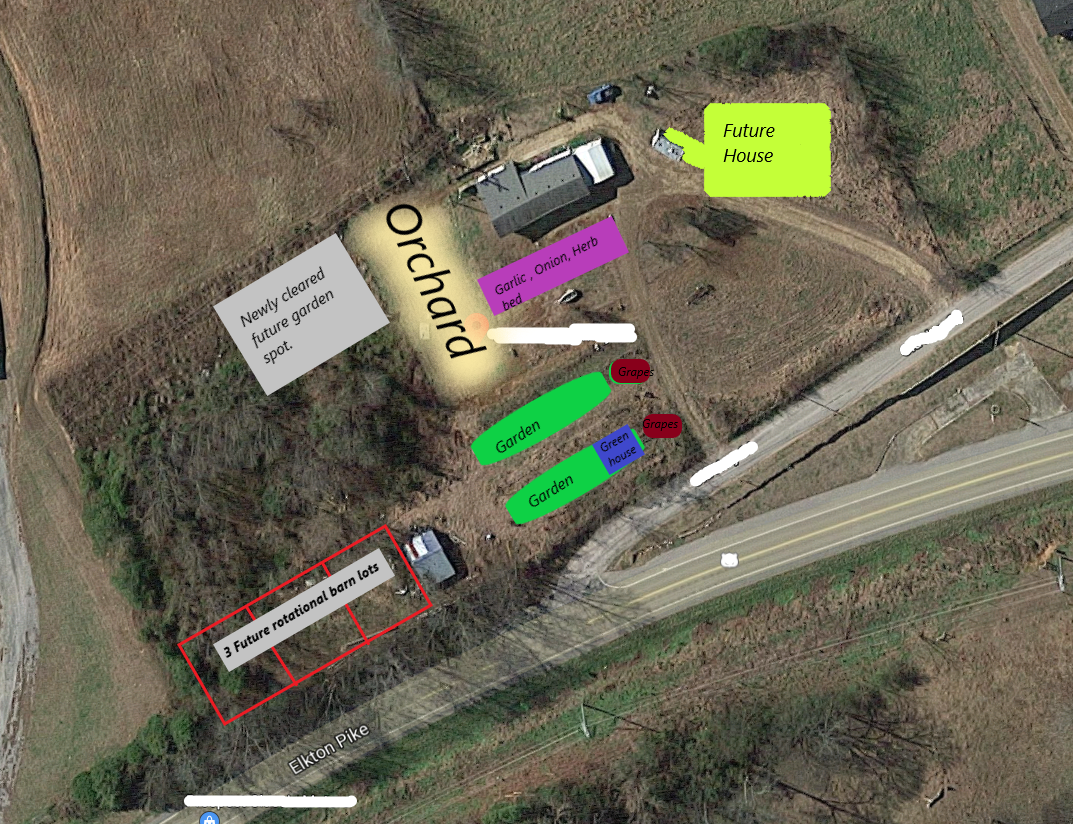 The thoughts on layout of the homestead is something that has changed several times.  It will also probably change several times in the next few years even,  but where to put the fruit trees was pretty obvious.  The hillside going up from the road to the top of the property  does not look like much of a slope,  but pushing a wheelbarrow up it full of compost ( why did we put the compost pile at the BOTTOM of the hill?? ) and you can certainly feel it.  The sun rises from the “bottom” of the hill  and travels up it during the day creating a micro climate perfect for young trees.

We laid out where the trees would go keeping them minimum 25 ft apart.  Staking out where the first tree would go then folding a 50ft rope around it to measure out  to 25 ft.   Then with two stakes with two 50ft ropes in half can put the next stake where the two ropes meet.  This allowed us to put stakes in while always remaining 25 ft away from any other tree.

Year one we planted apple,  pear,  peach,  plum trees.  Two of each going up the hill. Planted them in October and it did not rain that year again until December that year.   The next two months were spent carrying what seemed like infinite 5 gallon buckets of water to the young trees.  The following Spring showed that all the hard work had paid off and all the trees made it.  We also planted thornless blackberry bushes the first year,  we will cover that more in a future post.

Year two orchard wise was not as big an expansion as year one.  We had run out of open area to plant the trees and a large portion of the “orchard time”  was spent clearing new ground for a few more trees.   October year two we planted only one more apple tree, (we did plant more berry bushes though) an Arkansas Black. It is a later in the year apple which we like the taste of, kind of like wine. We are hoping it will store and cook well .

Year three for the orchard we did a little better  planting three trees.  Two apple and one more plum tree.    One of the apples was to replace the granny smith tree planted from the first year.

The original granny smith apple tree had been doing great, we thought,  which might have been the problem .  It produced in year 3 about a dozen little apples.  Then the weather shifted and summer hit hard and we probably should have picked off the young fruit.  The combination, we believe, stressed the tree too much and it died. A better course of action would have been to remove the apples so the tree could have focused more on root growth.  So far we have only lost that one out of eleven ,  but even that one could have probably been avoided.   It was a good wake up call on keeping a better watch on the young orchard. We were too excited by the idea and possibility of having apples so soon and it probably cost us that tree.  Patience is really needed here.  There is no rushing a tree growing.

The plans for the orchard going forward is to monitor but not baby the growing trees,  and at their young age, if any show problems to replace it.  At this point in time there is not really anymore room to squeeze in more trees. This could change after the house is built and we know where water lines and septic will be located.  We are discussing adding some figs and pawpaw trees maybe, but we have to see where we have that they could thrive. 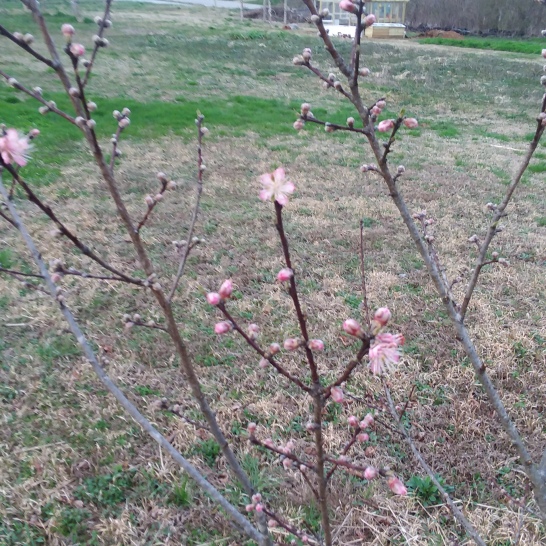 As we clean out the woods more and define what will remain woods and what will be pasture we do want to line that with nut trees.  There are no nut trees on the property at this point and that is something we want to correct. We are also looking to add some trees that will change their leaf color and drop leaves in the fall. We get the benefit of the leaves changing and then the benefit of new material to add to the compost. We got a couple of small oak trees around Earth Day last year and hopefully they will take off.